Attendance:  Brandon, Ed from his place, and Myself.

Objective:  To view and image Comet C/2020 F3 Neowise, which as moved into the evening sky and is now circumpolar.

Weather:  Foggy most all the way from Saint John to Petersville Hill, which is about halfway between Saint John and Fredericton, NB on Hwy 7.  Fog seemed to thicken and thin on the way to Petersville Hill.  Temperature was 13C with 91% humidity, and no wind or breeze of any kind.  No movement of the air, made for perfect foggy conditions.

Objective:  To view and image a bright, naked eye comet, which was supposed to be visible low on the eastern horizon, just before first light. 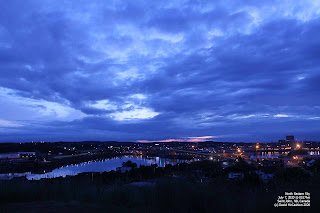 COMET NEAR THE DIPPER

Weather:  Partly cloudy to mostly clear, hazy, no wind, some ground fog later covering much of the sky except for due south, no dew, 8C, and almost no bugs.  Ed mentioned how it's rare to have the southern sky so perfectly clear, with the northern sky hazy/cloudy.  It's usually the other way around.

Objective:  To locate and view Comet C/2017 T2 Panstarrs which was reported to be approx. one degree from Phecda, one of the bowl stars in Ursa Major.

Objective:  To view and image the close pairing of Mercury and Venus that has been occurring around this time of evening for the last number of  days.  They came as close as under 2 degrees a few days before this.

There is a very advanced observatory that is located in the high desert of northern Chile that has studied Sagittarius A star, also known as the center of the Milky-way galaxy, systematically for 16 years.  They started in 1992 and used infrared detectors to see through inter-galactic dust to the region where it is thought to be the center of our galaxy.  It is believed that at the galactic center is a black hole.  This, not often mentioned, amazing project is noteworthy, imo, so I decided to do a blog post on it.

The infrared detectors, over 16 years were able to track up to 28 stars moving around a central location, with one star making a complete orbit.  They have also imaged a gas cloud being 'spaghettified' by the black hole.


After studying the video of stars orbiting around a central spot, I wondered if this was an actual animation of stars over a period of time, or was it some form of altered representation?  Thought of this because of the fact that a visual viewing cannot be done due to inter-galactic dust.  What did the actual data image look like?  So I looked up a contact email at the ESO website, sent an email asking that question, and received this answer from Dr. Steffen Mieske. I very much appreciate Dr. Mieske taking the time to promptly respond.

"The data taken with NACO are actual images that can peer through the intragalactic dust, in the infra-red.

The movie itself is then an accurate reproduction of the measured stellar motions over ~two decades. The raw images of NACO look ‘uglier’ but essentially trace the objects in a similar fashion."

"Actually, looking at the time-lapse, I have to be more specific – this is not only an accurate reproduction. This is a composite of slightly cleaned actual NACO images. You can see the artifacts of bright stars at the top left after a few seconds, looking like a wave pattern. Those are from the actual images. Not an artist impression."

I think the YouTube video above is the one that Dr. Mieske is referring to when he mentions the artifacts of bright stars in the top left.

Dr. Mieske also referred me to Stefan Gillessen, a researcher with Max-Planck-Gessellschaft, who is directly involved with this research.  I asked Sefan Gillessen how the original, raw data looked, before any kind of processing took place, and how they decided on where to look for the galactic center.  This was his reply;

"The raw frames pretty much look like any CCD raw frame, a mono-color frame, with still many artifacts. As an amateur astronomer, you sure know how these frames look like."

"The center of the Milky Way was first determined via the 3D distribution of globular clusters, and further by infrared observations, looking at the stellar density  and gas and stellar velocity dispersion - before the massive black hole was found, which nowadays is usually considered to be the "exact" center."

I then asked him if he was still working on imaging the galactic center now, and asked if he could describe how it works.  His reply was;

"...yes, I am working on that. And this is by no means done automatically, for example the telescope time needs to be requested in a competitive process for this science project. The data taking is largely automatically, still we often go to the VLT to assist the observations. We typically go there once a month, and then spend roughly a week or a bit more there."

I want to thank both Dr. Steffen Mieske and Stefan Gillessen for their contribution to this blog post.

Below are some videos from the European Southern Observatory (ESO) and the Max-Planck-Gesellschaft websites that help show and explain their fascinating and inspired work.  There is also contributions from researchers at UCLA in California, who are doing similar research.

This is astronomy done with some of humanities most advanced instruments and methods.  It's always very interesting, in my opinion, to see the current cutting edge of professional astronomy.


The field of view of the galactic center, being studied, showing the stars orbiting a single spot is .05", whereas, the sized of the full moon in our sky is 20".  This gives an idea of the size of area in the sky that is being studied, from our point of view.


At W.M. Keck Observatory, on Maunakea, Hawaii there is similar research going on.  Dr. Andrea Ghez gives a great lecture on black holes and she references this similar research many times, including at around the 22 minute and the 34 minute mark of her 1 hr and 11 minute lecture.  At approx. the 50 minute mark she begins to take questions from the audience.  Some great questions were asked, which yielded some very informative answers.

Last summer, on Aug 19, 2019 astronomer Tuan Do, of UCLA was observing Sag A and detected a massive brightness.

Stay tuned for news from the center of our home galaxy.  It seems to be a busy place.

Weather:  No wind, mostly clear with some haziness and a few passing clouds.  Cool enough to keep the bugs down, except for one moth.  Temperature went from 6C down to 3C.  Frost on the car windows the next morning.

Objective:  To observe and image a thin crescent Moon closely approach epsilon Tauri, one of the Taurus the Bulls eyes.  Also to observe a Starlink train of satellites passing over at 2135hrs according to Heavens-above.com, and to image three different comets in Camelopardalis. 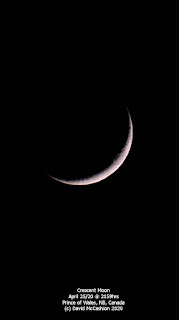 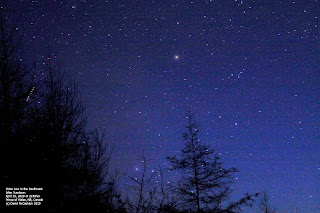 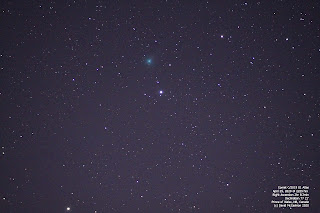 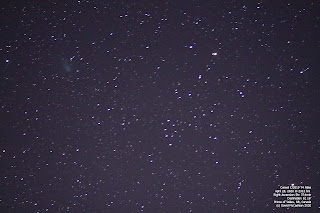 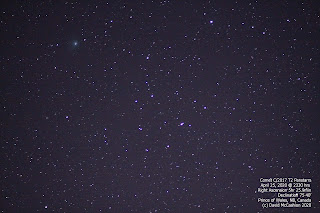 Objective:  To image Comet C/2019 Y1 ATLAS which was in Pegasus, low in the west at sundown. 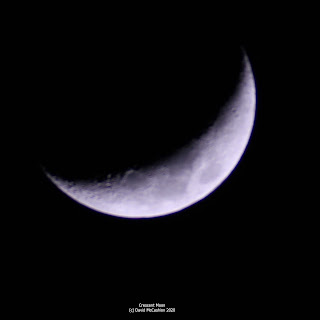 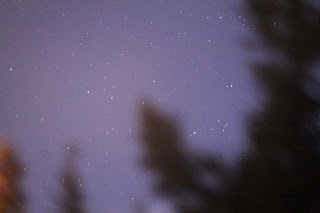